The Gnani Purush defines the term guru with unprecedented clarity 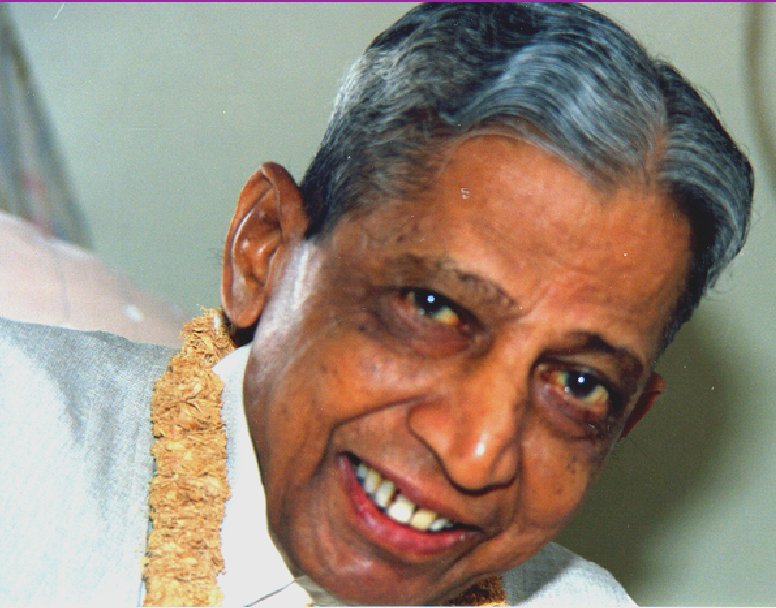 Vitarag means the One who is devoid of all attachments.

The religion of The Enlightened One is the Ultimate religion.

It is the religion of the Self.

It is not an exclusive label for any man made religion.

All religions of the world are relative.

Vitarag Dharma liberates you for ever.

All other relative religions point to the path.

The full version of the book, Guru shishya  is now being offered to the reader.
The words have come forth from The Akram Vignani and are original. They do not belong to anyone.
They are offered to humanity at large for parmaarth, the ultimate good.

This book was published by :

Its cost: Param Vinay...absolute humility & The Bhaav that I do not know anything

What follows is a minuscule satsang from the above book. This is the first
English translation of this satsang. All bold letters are the words of The Gnani.

Q: What is the meaning of purity of the self?

Purity means that there is no desire for anything in this world.
There is no beggar ship left of any kind at all.


So therefore, this place is totally different. This is not a shop. Yet, the world will call it a shop. Why?
Because they will say, " You also are trying to sell something."
Yes, I also do have a desire.
This is the desire that the bliss I have experienced should be shared and experienced by you too.
There is profuse suffering all over the world.
That is why we offer this.

Q: This is not a desire of yours, it is more like a bhaavna...inner desire linked to previous life charging karma...
of jagat kalyan...salvation of the world.

In this world except for Tirthankaras and Gnanis, none have had the bhaavna for salvation of the world.
They have sought a higher and higher status. If he is a sadhu, he would yearn to be an achaarya...leader of
a religious sect. Others have bhaavna of how to succeed in money laundering and black market.
Some have bhaavna of becoming a commissioner or a collector.
No body cares about salvation of humanity.
Everyone is yearning to be a guru in the relative world.


Q: What is this gurutta...this guru attitude ...in the relative world?

Gurutta means to increase and rise higher. He thinks that by doing so...adopting a guru attitude.. he will rise higher.
When will this come to a conclusive end?
This can never come to any meaningful goal.
Because the relative world is temporary and prone to destruction.
Therefore, he may have accumulated such gurutta, and try to show his guru...ism
but it is temporary and tenuous and may fall at any time.
In the relative world, laghutta...humility is needed.
All who strive to become gurus in the relative world are in the final analysis, useless.

The one who has not become laghu...opposite of guru...humble, without any desire for recognition..
is not fit to become a guru. In this era such gurus who strive to be
laghuttam...humbler than the humblest simply do not exist. All have proceeded to rise above the other.
This is no one's fault. This era and the adverse intellect is at fault.
The ones who begin to become gurus in the relative world are beginning their descent in spirituality.

Q:  Have you made any disciples?

I am the shishya...disciple of the entire world. I am the disciple of disciples. Why do I need disciples?
What will I do with them? Fifty thousand follow me now. But I remain their disciple.

No. I am a disciple of the whole world. Why should I become a guru?

Q: Let us assume that from today onwards, we call you a true guru and surrender to you. What then?

But, I am not free to become a guru. I am here to give you this Gnan...of Self Realization...and by being in
that Gnan you proceed to final liberation. Why should you sit here waiting for me to be your guru?
It is not necessary to believe that I am your guru.

I never become anyone's guru. I am a Gnani Purush. What is Gnani Purush?
Observatory of the world.
All answers are available there.

Q: Is the Gnani not a guru?

The Gnani never becomes anyone guru. We are laghuttam...the humblest of the humble.
How will I become a guru? It is not possible to do so, because there is no buddhi...worldly intellect..the intellect that
interferes...the intellect that increases worldly interaction in me.
Buddhi is needed to become a guru. You will not find any intellect in me.
See, how well this cart of mine...the Gnani's relative life...is running.

Q:  How can all these disciples be your guru?

They are all my gurus. This is because I accept anything they have to give...via their thoughts, speech or acts.
But they...followers of Dadshri...know that they are taking something from Dada.
I take the whole world as my guru, because wherever there is any truth
even from a dog, I accept it. I accept anything that is higher than me.

Q: That means that where we gain anything from anyone that person is our guru?

Yes, in that context all are my gurus. Therefore, I have made the entire world my guru.
It will be needed. This is because the knowledge is with the folks of the world.
The Lord is not going to come here.
He is not free to run your errands.

Q: Where do you place yourself in all this hierarchy?

I consider myself as a disciple of the whole world.
I am laghuttam...disciple of disciples...smaller than the smallest.
Dada Bhagwan is the Lord within.
He is manifest within.

Q: Currently in India are there other great souls like you?

How would I know that? If you go and investigate, you may know that.
I have not inquired in this matter.

Q: You would know as you are on the peak of the mountain of spirituality, would you not?

But how would I know that there is a higher peak than the one I am on? All those who have attained a peak
have said that they are on the last peak. I have not said so.

Q: You will be able to see all the peaks that are smaller than the one at which you are, would you not?

The smaller ones are visible but they are not counted as smaller. This is because
the peak where I am at, I have stayed put as laghuttam...smaller than the smallest...in the relative worldy
interactions...called vyavahaar. In worldy matters where folks are seeking
guruttam...superior, masterly attitude...I  have become laghuttam...inferior subordinate attitude.
What is the result of any attempt to become a guru in the relative world? Laghu.
The result is a fallback to that which is inferior.
What is the result of becoming a laghu in worldly interaction?
Guruttam...mastery...is attained in nischaya...the eternal inner  world.

Whoever becomes a shishya...disciple of this world will become Guruttam...eternal inner master.
This is the only way. This is the call for a change in direction.
All your egoistic effort to become superior in the relative world in any task is nothing but the egoism
of guruttam. Instead if you strive to become the smallest, and therby develop a
laghuttam ego, you will reap tremendous inner spiritual results of the Self.

Egoism of guruttam covers up the knowledge of the Self and egoism of laghuttam
unveils the Self.


If someone tells me," Sir, you are a great man." Then I would reply," You do not
know me. Curse me and then see if I am great or not." The policeman in me would wake up
if you curse me, would he not? He would say," What the hell are you saying?"
If you hear these words then you know the internal policeman has waken up.
If you see the nature of the policeman in me you are convinced that I have superiority...gurutta  in me.
If the policeman  nature does not wake up, then you will be convinced that
I am laghu...true humility...do you agree?

So if anyone curses or insults me, I would tell him, " Listen brother, this curse of yours is not
affecting me. I am even smaller...inferior...to the curse. Therefore, search for a curse that
will affect me. If you call me a donkey, I will tell you that I am much smaller than the donkey.
Your mouth will hurt you, because you will not find a sentence that will affect me.
My location is laghuttam...the smallest of the smallest.

The role of the Gnani is to awaken The Vitarag in all of us. 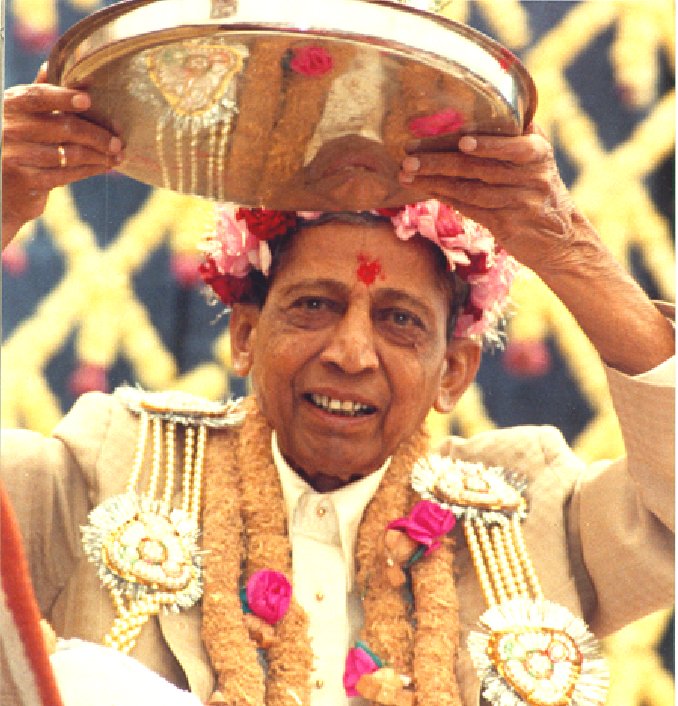 Gnani Purush Dadashri worships the Real in you.

We are no one's guru.  We worship the Lord within.

We show you how to do the same by awakening The Lord within you.
The hands folded inwards denote the worship within.

The Akram Vignani walked the face of this earth to

In addition he provides human beings of this era with

The extraordinary shortcut to Moksha...eternal freedom

in which no doership is called for..

there are no rituals..

there are no gurus..

there are no sacrifices to be made...

there is nothing to renounce..

there is no organised religion..

no yoga of any kind..

there is no commerce in the name of religion.

does not negate any of the existing world religions...

The religion of the Self...

is above all man made religions.

is the One who introduces you to

and thereafter your work is done.

The Awareness of Being is Bliss

your link to the world within...

Aptavani
Aptavachan
Simandhar Swami
The Gnan Vidhi
Home
Who am I ?
Who Am I : The Book
The Gnani
Aptasutra
Pratikraman of Akram Vignani

Dearest Lord within me...Grant me the infinite inner strength, not to, not cause to, nor instigate anyone to, hurt the ego of any living being, through the medium of these thoughts, speech or actions, even to the slightest extent.